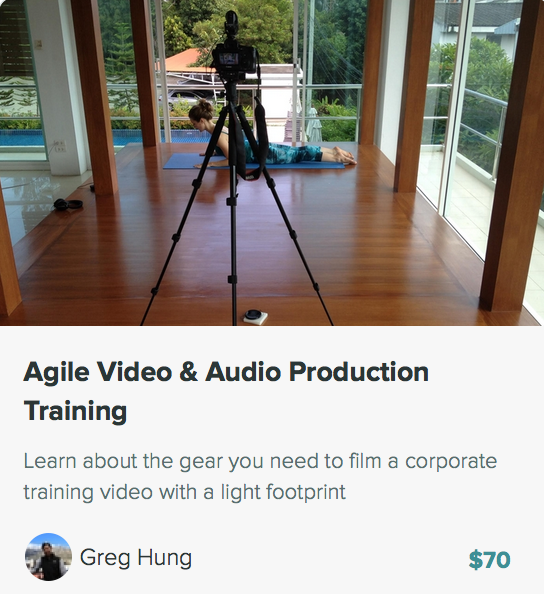 I just wrapped up Pilates training video shoot. It was 4-day video shoot with each day split into 3 X 45 min video sessions. The client wanted a 2-camera setup with audio and 1 person. Here are my lessons learned during this shoot.

Here is the gear I used

Canon 6d would be my primary camera with a 24-105 L lens shot mostly at a 35m focal length. I shot it using a cinelook profile, which would create a film-look reducing the need for color grading. The shotgun mic would provide sound throughout the project and function as backup audio. The Canon 6d had a 30-minute recording limit. To deal with this I gave the instructor a 5-minute warning before 30 minutes. I would use this interval to change out memory cards or change batteries if needed.

The Canon 7d would function as the b-roll camera using a 50m f1.4 lens. This provided a nice soft image in the background and good lighting.

Lighting and time of day

Lighting was a huge factor in this shoot. Our very first shoot was outdoors in a yoga platform at 6:30am. We had to wake up super early. The backdrop we chose had the sunrise behind us. The problem with a sunrise is that the sun rises quickly as does the lighting. Eventually it got to the point where the sun was too bright and distracting to shoot. We changed shooting locations to multi-purpose room. This room was indoors, but surrounded by glass and had open sliding doors. Our main shooting location was on a raised wooden platform by the windows. It had a beautiful swimming pool backdrop. We chose to choose at noon and 1:30pm. At noon the sun is overhead, which was good lighting conditions. The buildings ceiling blocked any shadows and the sun wasn’t shining on the instructor. By 3pm we could notice the sun dropping. This would create shadows and the sun would begin moving onto the instructor creating a weird shadow overexposed effect. We dealt with this by relocating the shooting site off the wooden platform further indoors. We found that 11am – noon was the optimal time to shoot at the wooden platform. I also had to constantly adjust either the aperture or iso to adapt to the lighting conditions. I experimented with iso auto and auto exposure mode (AV), but I didn’t like or trust the results. My plan was to use camera 2’s broll during camera 1’s lighting adjustments.

The lesson here is to be aware of the time of day you shoot and how the sun will affect your shoot. We shot in Chiang Mai, Northern Thailand. The sun tends to be more powerful in this region.

Three 45 min back-to-back sessions requires some planning to ensure you have sufficient memory card capacity, are within the recording length limitations, and have sufficient battery power. First the Canon 6d has a recording limit just less than 30 minutes. I had 2 X 32GB plus a 16GB SD card and 3 batteries. The Canon 7d had a maximum recording limit of 12 minutes and 43 seconds. Don’t quote me on that. It’s around there. I had a battery charger on-site ready to charge the one battery not in use. I used the Canon 6d as my primary camera. This way I could keep it rolling for at least 30 minutes. At the 25-minute mark I gave a hand signal to the instructor that meant we had 5 minutes to break. The break would give me an opportunity to cycle out one of the batteries and one of the Canon 7d memory cards. It would allow us to start another 30-minute video clip with the Canon 6d. The Canon 7d was used for b-roll so I would try to let it record until 11-12 minutes before recording again. I had my laptop on-site so after the break and ensuring everything was recording I would copy the data onto an external hard-drive during the shoot to save time. The bottom line is to be aware of your resources, their limitations, and to come up with a plan to keep recording.

Communication with the instructor

I was working with a Pilate’s instructor that was recording a video in front of the camera for the first time. It was important to have a 2-way communication for a successful shoot. She needed to tell me if she was standing up so I could man the camera for a tilt shot. I would need to advised here of the 25 minute mark and to pause when planes camera overhead. You also have to build a certain rapport and comfort with your star in front of the camera. If they are not comfortable it won’t look natural and their personality won’t shine through. My tips for this are to be yourself and have some casual conversation at the beginning of the shoot. Here are some sample questions. How was your weekend? How’s it going? How did you find the shoot?

Workflow for beginning and end of day

It’s a good idea to develop a process or routine especially for a multi day shoot. This is how I approached it.

You may not be in this situation, but having 2 cameras and a field record is a 2-3-person job. I had to constantly walk around to monitor things. Here is what I was looking for

Transport and pack the gear

I was using my case logic camera bag to pack my camera, lenses, and laptop; I had to use another camera bag to transport lighting, mic, and other accessories. The large manfrotto had its own bag. The first day I had a motorbike so I was able to leave the heavy tripod with the shoot manager. On subsequent shoot it was just over a 1km walk so I was able to transport my camera and lenses. I would leave the tripods on-site. In Thailand it’s more common to take a motorbike or walk. Cars are not as common to drive. I was lucky my girlfriend picked me up on the last day of my shoot when I had to take all my gear back.

Well there we go. There’s always something new to learn. A lot of this material is covered in my courses: Agile Video and Audio production and The Business of Video and Photography if you want to take a deeper dive.