It was my last opportunity to score some aerial footage for the my Australian travelogue series of the Bondi beach, Sydney Australia on a rare beautiful sunny day in Autumn. As I started off my futuristic remote controlled quadcopter from Dji Innovations aka the G-copter my plan was to film some of the surfers above the ocean. Off went the G-copter as I flew it above the ocean and the surfers while I stood on the comfort of the grass adjacent to the Bondi skate bowl. I started to loose sight of the G-copter and this made it harder to figure out which direction on the remote was was back to me.

The G-copter became a white dot and I started to see white dots in the sky. I think I was becoming delirious thinking of how I just flew $1200 off to the Bondi sea never to be seen again. I just purchased this device 5 days ago and there is an adventure story about receiving it 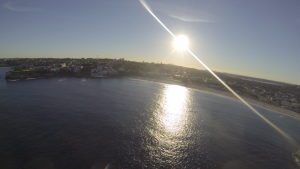 in Honolulu Hawaii which I’ll save for another time. My dad can tell you the story too. I sure felt like an idiot as I began to try recall the terms of my insurance coverage for this quadcopter.

I remember seeing the fail safe function on the G-copter on the internet and quickly googled it on my smartphone. From what I remember the quadcopter should remember where it took off and return to where it took off. I had to turn off the remote control to activate it. I could no longer see it and in a desperate attempt I shut off the remote control. I stood there for what seemed like hours with no G-copter in sight. The Bondi crowd witnessing my loss. I began to think of how I would complain to the manufacturer Dji Phantom for this feature not working and how it was too easy for some big kid like me to do this.

Then.. like I was living in the future I saw the red and green lights out of the sky the G-copter returned to me.  I was torn between using my SLR to film the surprise return flight, but I wanted to make sure I grabbed it as it slowly descended. I grabbed it as soon I could reached and struggled to disconnect the battery, while not hurting myself from the fast moving plastic blades. A small crowd gathered to the same amazement that I had.

Now that I have confirmed that this feature works by accident I am a believer in this product. This is the real deal. I believe more than ever that we are living in a wonderful time to have access to technology. Cheers to Go Pro and Dji Innovations for creating forward thinking products and lowering the barriers for acquiring high definition aerial footage. I am excited about the future. Now it is my time to get on with my mission to inspire the world to travel.

Sign up and get Free Access to some of our Creative Online Courses from Aerial Video, Gopro, Gimbal Video, Stock Footage, Video Editing & more.