The M1 2020 lineup of Macs from Apple were released in late 2020 represented one of those giant leaps in computing power and value that we haven’t seen before from Apple. Apple released their so called Apple Silicon M1 chip, which is a super powerful processor created by Apple instead of Intel. I watched the reviews from the Youtubers as they were proclaiming that these M1 machines were legit. I decided to pop in my local best buy at the time. I was shocked to see that the price of these M1 laptops were cheaper than the intel Macbook pro’s with larger screen size, ram, and dedicated graphic cards. I started watching more reviews. Could this be too good to be true? 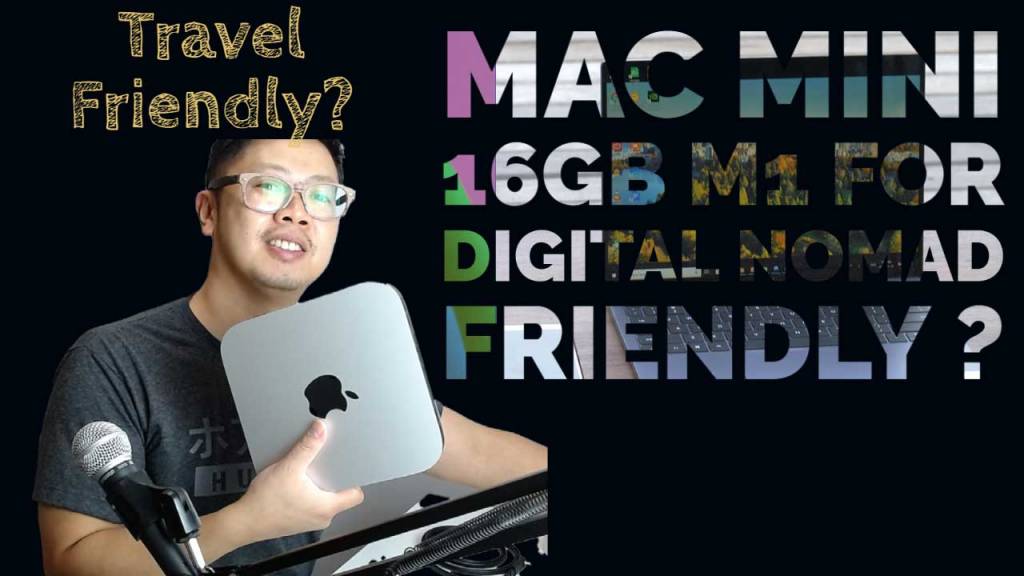 Who is the Mac Mini M1 For?

The M1 Mac Mini could fit a variety of uses. You could use it as your everything computer at home and to connect to your tv as a hybrid workstation and entertainment system. It’s great for creatives and especially video editors given the increased horsepower with the new M1 chip. If you have an existing windows laptop like I do this is a great way to get into the Apple ecosystem as a second computer. You can repurpose your accessories on the Mac mini if you would like. It is compact and light enough to travel with to fit the need of digital nomad creatives like myself.

My last Mac purchase was a Macbook Pro in 2013 fully specd out for video editing at the time. Since then every new generation of Mac’s especially the Macbook pro line were getting increasingly expensive without much performance gains. It got to the point in late 2018 that I needed to upgrade my machine for my work, which involves primarily video editing, graphic design, email, screen recording, and everything in between. I settled on the Huawei Matebook Pro X 16Gb and converted back to Windows and the  Adobe Creative cloud system. Every year I would price out different configurations of Mac’s powerful enough to video edit and it would always come between $2500-4000.

After watching enough reviews I ordered the M1 Macbook Pro with 16GB ram and 500gb SSD for just over $1800US. While waiting for the M1 I found out that the Mac Mini had the same M1 chip and all of the essential ports. You could basically plug-in your keyboard, mouse, monitor ,and external hard-drive and you could pay almost half the price of the Macbook Pro M1. This was getting even better. I settled on the M1 Mac Mini 16GB with 256GB SSD. This was the best value performance configuration in my opinion. The hidden cost is that you need those extra accessories like an external SSD.  Apple charges a premium for SSD storage and  you can’t upgrade the ram later on so I did 16GB because I would be doing taxing workloads like editing 4K footage from camera’s like the Pansonic GH5.

The setup was straight forward especially if you have an existing account. You will need the following as the Mac Mini basically just comes with the power cord and the box:

disclaimer: some of the links are affiliate links for products that I use and recommend and that help me out a bit and not extra cost to you.

Please watch the video for more in depth analysis. Overall this machine performs like a champ especially on final Cut pro. It boots up fast, and working on Final Cut Pro in the time and exports on 4K Panasonic GH5 footage were no problem. These projects had adjustment layers, transitions, music, and broll.

On several occasions I have ran out of system memory when running a heavy Final Cut 4K Video project and open several other applications like Google Chrome, OBS, and perhaps something like Adobe Photoshop. I don’t have a screenshot, but the quick fix is to force quit the non-essential apps. There was a window, which automatically popped up and gave the amount of system memory being used. Final Cut Pro used the most up to 7gb on my 10min 4K project, so I just closed Chrome and OBS.

You should be aware that there are various plug-ins like color grade luts and various adjustment layers that are not functioning as of Jan 3 2021. This means that I cannot install and use the Peter Mckinnon Lut’s at the moment. I did manage to install my luster color grade package though. I ended up making an adjustment layer from scratch using Motion and tested my Final cut Sharpening Plugin. They both work on the current versions on Final Cut 10.5 on Big sur osx running the M1.

Update Jan 16 2021. I was in dispair as Peter Mckinnon or his support didn’t reply with a response to his LUTS being compatible with Final Cut pro 10.5 on Big Sur. He was not the only one, but I use his LUT quite often.  I have found a workaround for the applying the LUT on this setup. There is a custom LUT available under the effects browser as of version 10.4.7 that will allow you to use your LUTS in a .cube file format. once you apply the effect simply go to the inspector and browse for your custom LUT file. I think the video will be explain it. This is great news! Peter Mckinnon Luts now will work on M1 Macs running Apple Silicon. Peter you owe me a Video Podcast haha.

I then installed the Adobe Creative cloud apps like Photoshop 2021, Premiere Pro 2020, and Adobe Rush. Working on all of these apps even though they are not optimized for the M1 chip are still fast and snappy. However, I did get a beachball while working on Premiere and did get one occasion where I ran out of system memory. This was when I had all these creative cloud applications open at the same time and probably many Google Chrome tabs running. This is rare, but an export of a 10 min project with 4K footage to h.264 took 4o minutes. I didn’t do detailed benchmarks and I’m not that type of guy, but other 4K exports on Premiere took awhile as well. I’m sure this will improve as Premiere Pro optimized itself for the chip. Adobe Lightroom was optimized for the M1, and I edited a couple of photos and as expected performance was snappy.

For gaming I use the new Google Stadia way of gaming since you can game on a Google Chrome Browser. I had some trouble with the system recognizing my Logitech and PS4 controller. I don’t think this is an M1 issue, so I just used the keyboard and mouse. I tried two games hitman and Lara Croft and the game play was snappy. Stay tuned as I hope to have more games installed on here to test. Jan 16th update. I have since purchased one of the hottest games called Cyber Punk 2077 and been running it very often on Google stadia on the Mac M1 mini. It runs great on this setup. I have to use the PS4 controller using the USB cable. I can also livestream to youtube through stadia with no lag. Cyber-punk is one of the newer games so I can see now that cloud gaming especially with a M1 Mac replaces the need for a newer generation console if they can continue adding a good selection of games. The advantage of doing cloud gaming is you don’t have to worry about playing patched for bugs. You are always playing the current version.

I don’t see why you can’t travel with the M1 Mac Mini. The Mac Mini is small enough to fit in your backpack and weighs just a bit more than the Macbook Air. It’s not designed for the laptop lifestyle if you want to use it at coffeeshops and airports. If you travel with it you will be at a minimum the power cord, an hdmi cable, a mouse, and a keyboard. All these accessories are light and can fit in your backpack. If you use it at home, your airbnb, hotel, or cowork space you will need access to an external HDMI monitor or a LCD TV. These are pretty common these days so I’m certifying it as fit for travel. I was an existing laptop that works fine for the laptop lifestyle if I did to flip it open to work at a coffeeshop. If you don’t have an existing laptop I would recommend the M1 Mac air or Mac Pro.

The new M1 Mac mini and the rest of the M1 2020 lineup is a gem for customers wanting leading edge performance at a reasonable price. My 16GB M1 Mac Mini with 256GB came to $965 US with tax. Add-in another couple of hundred for the external hard-drive and keyboard and this is one of the great deals of all time from Apple. It lowers the barriers to entry for the Apple ecosystem and so far I’m very pleased with the the performance and I can this is a legit creative machine. I’ve heard many people that they will wait to see what Apple offers in 2021 in terms of the high end Macbook Pro line-up. Yes I’m sure they will release more powerful machines and this will always continue to be the name of the game. Technology and things are changing fast so it is up to you when you decide to enter and how much power do you need. At the moment these M1 computers are matching some of the best that Apple has to offer on the Macbook Pro.