Last month I sold my Phantom 3 pro drone in Vancouver. Yes that’s right sold my drone. I decided to list it in March while in Bali. I was satisfied with what I had already filmed around the world and the sling bag that I was carrying around was starting to become a chore as a frequent traveler. It was an extra backpack on board the plane. The weird thing is as a Digital Nomad Videographer I had also formed an attachment to it. All the destinations we flew together and people I’ve met through the drone. A month later I switched to the Hardcase backpack. This made things a big better for transport, but I knew it was time to sell my Phantom 3 Pro while it still had decent value. It already had lost value with the release of the DJI Mavic. I had unsuccessfully tried on Facebook in Bangkok and Penang. Not enough serious offers and not enough time.

I had some time in Vancouver and I started off by looking at the local market price for this drone brand new in local stores like London Drugs. From there I went onto craigslist and compared my offering with others and then listed it. Soon enough I got a phone call from a serious buyer and we met. Watch the video to find out more of about the process and to see the actual posting. Now that the drone is sold it became obvious during shooting my Free Aerial photography course for DJI Mavic that it is he obvious choice. It can produce 4k video of similar or better quality and fits in my existing backpack. I think it’s important not to get too attached to your gear. It can be a good decision to sell and use those earnings for another investment towards your business. I’m happy the new owner is a responsible pilot that will actually use it for geo-mapping purposes. 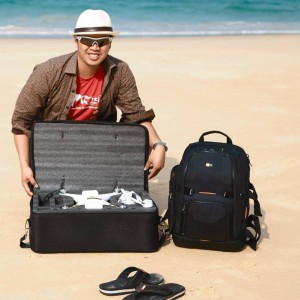 Sign up and get Free Access to some of our Creative Online Courses from Aerial Video, Gopro, Gimbal Video, Stock Footage, Video Editing & more.