Yes you heard that right. After buying the drone in May 2013 from Honolulu I lost my drone in Tokyo in early March. It hurts because this a creative tool for my business and I also lost my Gopro camera. However, if I can prevent someone else from losing their drone or bringing more attention to drone safety then this post will be worth it.

I planned for my filming trip to Tokyo quite carefully especially when it came to the drone. My last sets of flights were in Vancouver during the Christmas season. The temperatures were quite cold around freezing to 7 degrees Celsius. On my first flight I discovered that I was getting continuous red lights on the Phantom 1 once in the air. Red lights could mean a number of things, but it usually wasn’t good. When I’ve had red lights before the drone has lost altitude and eventually slowly fell from the sky. I tried to troubleshoot it and came to the conclusion there was an issue with the battery or the weather. I wasn’t able to get a battery and through troubleshooting I determined it wasn’t the weather. I had flown all the way from Taiwan to Vancouver so I thought the risk was worth it to get Vancouver aerial footage. I also knew because of the Christmas holidays that I would have some rare opportunities to fly it in some public spaces as it would be quiet. I just thought I would fly safely and not too high and take it from there. It ended up being an excellent filming trip. Check out the video.


When I came back to Taipei I gave it a calibration test and then a test flight and saw the drone still was giving red lights. It would still fly with the red flights, but there was an upper limit to how high it would fly. I purchased a new 3rd party battery in Taipei before the Tokyo trip. I even took her up for a final test flight at Huashan park. I saw this resolved the red light issue and I was getting more height from the drone. I was set to fly in Tokyo.

I had asked some locals in Tokyo about whether they knew the regulations about flying in Tokyo. I heard different opinions. First, that it would be too crowded, and others thought that it would be ok in an open area. I usually found good luck waking up around sunrise to fly. Not only for the good light, but while everyone is sleeping I didn’t have to worry about hurting people. 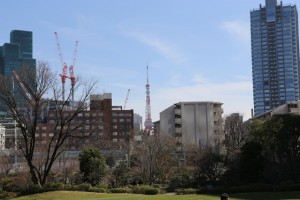 The Tokyo Tower at Midtown park. I had a successful flight here on the same day just after sunrise

I really didn’t know where to fly the drone until I got to Tokyo. I spent time scouting the area myself beforehand my first couple of days. I found a park near the Tokyo Midtown center. It was perfect as it had a large open park and it was minutes away from my Airbnb apartment. It also had a great view of the Tokyo Tower, Tokyo’s version of the Eiffel tower.

My next target for aerial footage was the Tokyo Skytree. I shot some night footage around the tower the night before and discovered a nearby park on my Google maps a 6-minute walk away. The park was called Sumida Park and it had a large open area with a view of the Tokyo Skytree. The next day was supposed to be the only sunny day on my trip. I checked the time of sunrise and made sure I woke up early. This would be my only chance to fly as I wasn’t going to fly the drone in the rain.  I also has brought the wrong power adapter for my charger, which mean that I only had 2 flights. That is of course if I decided not to buy one in Tokyo. 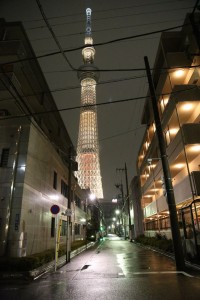 During this night of getting footage of the Tokyo Skytree I found Sumida park as a safe place to fly the drone. I’m glad I didn’t attempt to fly it here with all the wires and buildings around

I usually am not an early bird, but if I need for work then I’ll do it. I woke up before sunrise to ready for the first flight. I wasn’t set on flying in Midtown park. I only had 2 batteries, but as I was walking through the park to the Roppongi train station I changed my mind. The sunlight was almost perfect and I thought I wouldn’t have another opportunity. I planned to use my older battery for this flight and the newer one for the Tokyo Skytree. I opened up the case and brought out the drone. As I was setting it up a couple of older Japanese men came to take a look. My first flight it flipped upside down as it took off.  I didn’t mark the propellers clearly enough. I immediately knew what the issue was. No coffee and and I quickly readjusted the propellers so they were on the right arms and got the drone up in the air. I had an awesome flight above the midtown park. I was on a high and quickly packed up the drone to head to the Skytree.

I finally got to Sumida Park around 8-9am. Old men were sitting on the benches looking for some entertainment. I must have been just what they were looking for. How often is some guy going to roll up with a suitcase, open it up with a little helicopter drone with a camera attached. I took some photos with my phone before the flight. It was a little windy, but I thought the conditions were manageable.  I went through the flight checklist. I did notice that I wasn’t getting solid green lights after going through the checklist. I was getting flashing orange lights. However, many times I had started the motors first and then would help synch the green lights. Out of impatience I decided I would get it in the air and see how it was responding. 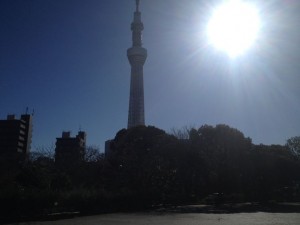 a view of the Skytree from Sumida park. Notice a good distance and lots of open space. An ideal location to fly the drone. 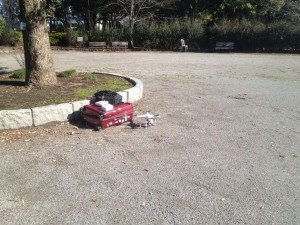 I transported the drone in my red kirkland suitcase. This is the last picture I have of it.

I started her up and she flew fine. I noticed the sun was shining from the east so I want to fly the drone so the camera would point at the Skytree from the east. Not facing the sun directly. I should have taken off from the east side of the park, but because my suitcase and things were in the center so I took off from there. In hindsight that was a mistake. I flew her straight up and forward a little bit. I started to get comfortable and planned to quickly run to the east side of the park 10 seconds away. There was a big tree blocking my view. As I ran to the east side of the park I tried to get back control of the drone, but it was very high now and the wind seemed to have gotten a hold of it. I couldn’t tell which direction the drone was facing and because of this I couldn’t figure out which way on my remote was forward and what was left. The drone also didn’t seem to be responding well to my remote control. In a panic I shut off the remote control to kick in the return to home function that had worked for me in the past at Bondi beach. I stood silently anxiously waiting for it to suddenly appear high above my head. 10 minutes passed and I had a bad feeling it wasn’t coming back. It didn’t. My first thoughts were that I hope it didn’t hurt anyone or damage anything. I packed up and thoroughly walked around the area searching for it for 30 minutes east of the park. No sign of it. I’ve had many close calls, but have always seemed to be lucky to get the drone back to live another day. Not this time.


That stings. I lost a new battery, Gopro 3 hero black, Dji Phantom 1 and the memory card with some footage on it. I value the loss at around $1000 US.  This loss is going to hurt me in terms of an asset to produce footage for my business. I did bang it up quite a bit while I was learning to fly it. I consider this my aerial flying tuition. I felt that I did get good use from the drone and the Gopro. Its not in the budget right now to buy a new one. After this experience I’m deterred from flying a larger drone with a larger camera for the time being. 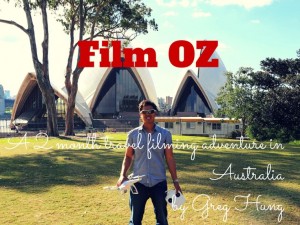 Filming with the drone near the Opera house

Flying with the drone freely in Auckland New Zealand

I hope you don’t have the same experience. I’m a pretty careful guy so this makes me concerned for many other drone owners. I really enjoy aerial filming and it is one of the aspects of video that gets me excited. A part of me wants to know what happened to my drone. Did it land somewhere? Did it crash on some rooftop.

If you do learn one lesson from my loss here it is this. A drone is exciting an opens up awesome possibilities for creating video and its damn fun. However,  If you do get a drone please make sure you take time to make safety the top priority when flying. The last thing you want to do is hurt someone or a group of people. You don’t want to damage expensive property or some famous tourist attraction. You certainly don’t want it to be sucked into an airplane engine and take down an entire plane with people in it.

Safety Drawbacks to the first model

How to Travel and pack your Phantom and Mavic drones