When I first started out in video I paid more attention to the visual side of the video rather than the audio. My videos at the time were mostly travel music videos so I would find a track to replace the on-board microphone later in post-production. I thought I would create a quick post to help videographers to take their audio recording to the next level. I’ve been using a Rode shotgun microphone for field recording on the SLR camera and my Yeti Pro for voice-over recording. I found that the shotgun microphone was an improvement over the onboard SLR microphone, but still wasn’t professional quality. The yeti mic is not designed for field recording and recording multiple audio channels. I’ve been keeping an eye on the Zoom H4n for a while, but I’m glad I waited for the Zoom H5 and H6 recorders.

I recently shot a 4-day client shoot that needed high quality multi channel audio for use with training videos. The challenge would be to capture an audio track from a primary speaker. I would also need to capture sound from another speaker or someone from the audience asking questions. I would be shooting in different venues that would have an in house audio system that I would need to capture as well. I needed a versatile audio setup to adapt to different situations.

These recorders are from the same company as the Zoom H4n. The major difference between the H5 and the H6 are that the h5 has 2 XLR inputs. The H6 has 4.

These mics would provide a wireless mic close to the speaker’s mouth. Each lav would operate on a separate channel and connect to a different XLR input on the H6 or H5.

I used this as the backup audio channel. This would record whenever the camera was rolling. I call it insurance.

Due to the distance of the house audio system from the actual speaker we used the Zoom H6 recorder as inputs for the Lav mic. Both zoom recorders have a built-in microphone that has good audio capture ability. I managed to learn to use the H6 very quickly as it’s similar to the H5 with just a more colorful screen, more XLR inputs, and beefier audio capsules. These audio capsules can be changed between the H5 and H6.

The zoom recorders also have the ability to record a backup file that is about -12 DB software than the primary audio file.

The zoom recorders are easy to use, but tend to create a lot of nested folders to find the files. A tip is to make sure you have set up the date on the recorder before recording. You can also update the firmware to version 2 for automatic synch markers. When you are synching the video files to these separate audio files this will help as you can easily find the starting points.

The highest quality files came from the house audio system. The files form the lav mic running into the field recorder were also high quality.

You also have to make sure that you have to turn on the correct channel input to make sure you are recording from there.

Preview my online course for Video lessons on how to do this and more. Claim your 50% coupon here 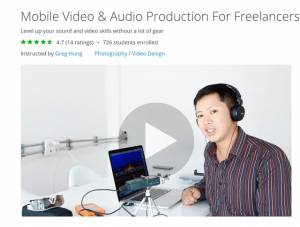