I got invited by a Seattle based agency Zooppa to create an Olive commercial for Lindsays. I thought why not it could be fun. This would be our first food commercial. Here are the exciting behind the scenes details of how it unfolded.

First I had to read the brief to understand the requirements. We had to have the Lindsay’s olives can and a consumption shot. In Taipei olives are a hard thing to come by nevermind Lindsay’s olives. I started calling Costco, and gourmet grocery stores like City Super and Jason’s market place. I ended printing the label at a Taipei 7-11 of all places and finding the one coffee can that fit the label at City Super. We bought the olives from another brand as black olives all look the same.

Next I had to select the actors. In Taipei it is difficult to find foreigners, but I’m fortunate that being a former student that studied chinese and an English teacher I knew some friends willing to help me out.  They would be representative of american people, which and Ron has a great off and on camera personality.

I met with Ron and we looked through some of the other olive and food videos to brain storm. We couldn’t figure out any ideas, but I managed to find some inspiration after seeing an olive skewer. The video would have the theme that olives are a key part of the party that you can bring with you anywhere. We ended up filming a green screen segment the next day with Ron. The plan was to film the main shoot at the Celebration Canada event as I thought it would create more of a festive North American feel in Taipei.

Serena bought some fruit which we pre-cut before and I bought some beer to reward my friends and to enjoy on the shoot.

I drafted out a shot list and sent a vision to the actors before filming day.

here is a copy of what I sent out. 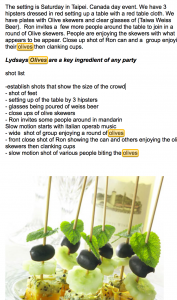 Filming day we were rushed. We actually had an emergency the bottle of olives fell through a hole in one of the bags and smashed in the MRT station. My heart sank. We couldn’t do anything without those olives. Was I to resort to picking out the olives from the floor and washing them? I couldn’t do that. We were so lucky to find 2 bottles in the local Shida grocery store as they are rare in Taipei.

Off we went to the Hakka cultural park where our next challenge was finding a table to set up. After some patience, hustle, and an eagle eye I found a table. I managed to find some chairs and now we could set up. Serena and I made the skewers and poured the drinks.

I went about getting some group and individual close ups of them enjoying olives. I went through some of the other shots on the shot list. There were frequent interruptions as Ron is quite a popular figure in Taipei. I shot the video in 1280 X 720p 60fps as I thought about doing some slow motion. I ended up doing this with Ron enjoying the skewer. It helped that I think Ron was actually enjoying the skewers.

We did mostly candid shots with the actors. I think the shoot took about 90-120 minutes. I knew that got all the shots I needed. We filmed some of the scenes from different angles to give it a more cinematic feel. We stayed at the event until the evening where we were rewarded with a live concert. I used some of the footage from this on the green screen at the end.

It took me a long time to find the right music track. I was looking for something upbeat with a bit of rock to it to give it the energy. I made to luck out on soundcloud and found an awesome track from killthenoise. I used the green screen scene with Ron and replaced it with the concert background to leave the ad with impression or a rock party feel. I decided to create custom coloring using some subtle cross processing and ad some saturation. Here are some screen shots of the settings in Final cut Pro X. Keep in mind I film with the technicolor profile with has no saturation. 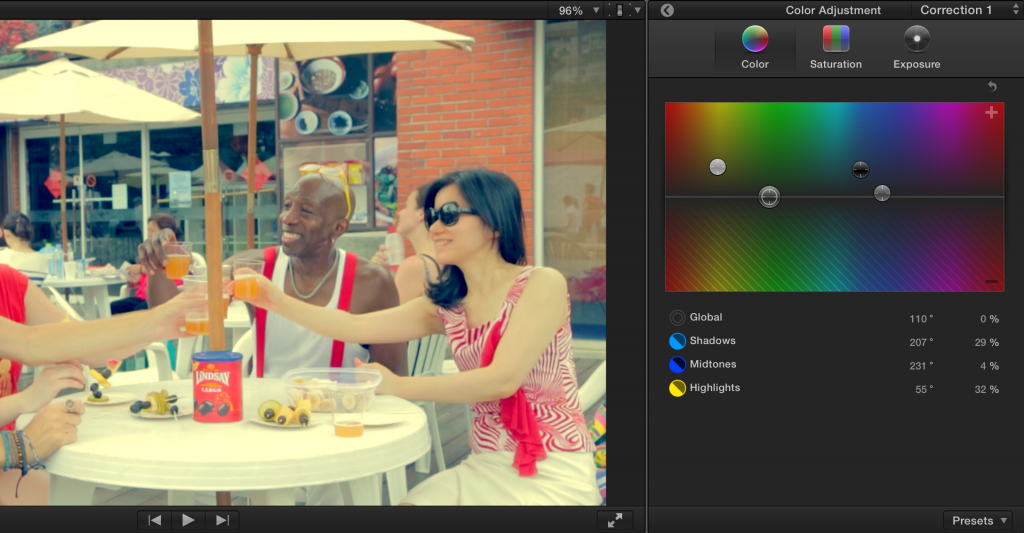