Our Bangkok stock footage collection features 4k drone footage aerials to HD around Bangkok from the highest viewpoint on top of the State tower , skyscrapers of downtown, to the action riding a tuk tuk, floating market, and aerials of the famous temples around the Phraya river. We updated the collection in 2017 to capture rare events like the Songkran watergun fights, rooftop bars, the grand palace, cowork spaces, and aerials of the Bangkok cube mahanakhon.

Khaosan road is popular for it’s nightlife and the many tourists in Bangkok. We managed to get some action before the sunset as well as at night. At night we were fortunate to take the tram ride around the city. This led to a slow ride down the entire Khaosan road at night with a perfect opportunity to capture some moving nightlife videos on this crowded street.

Bangkok is well-known for it’s beautiful temples. We got footage of the famous reclining Buddha and a rare opportunity to take footage of the Wat Pho temples at night with no tourists around! 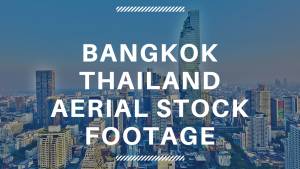 Asiatique is a recent riverfront market along the Bangkok river. The journey on the river let to some nice shots from the water, the boats, and the market. There were some beautiful shots of the skyline and upscale restaurants and bars.

The popular skybar on top of the State tower was made famous by the movie Hangover. We managed to capture some of the action on the skybar and some of the best views of Bangkok at night.

Click here if you cannot see the Purchase Button